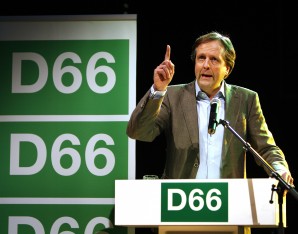 In 1966, Dutch society was eager for democ­ratis­ation and more participation of citizens. Dis­sident liberals and social­-democrats joined people without a political background to form a new party, Demo­craten ’66. A party that identified the urgency of radical reform and developed proposals to change the political system. Voters were to have more influence on policy through con­sti­tutional reform. The party wanted to achieve through the introduction of measures such as the direct election of the Prime Minister and local mayors, while stronger bonds between voters and mem­bers of Parliament would reduce the distance between the electorate and their representatives. The party consciously sought and still seeks to break the hold of traditional class and religious alignments in favour of a far going pro­gram of institutional reform.

D66 is a progressive liberal party and recognises its roots in the free-spirited leftist liberal party Vrijzinnig Democratische Bond (1901-1946). Hans van Mierlo, co-founder of D66, formulated the party’s position in the political spectrum clearly: “Both liberalism and socialism together have been sources of inspiration for our party. This is justified by the fact that during their historic developments, both movements have taken respon­­si­bility for a part of the whole truth, and, consequently have turned that part into the whole truth. As a result, things that were complementary have become opposites, have become caricatures of themselves: Liberty against equality, individual against community, selfregulati­on against govern­ment, individuality against solidarity.” The ideas of D66 give testimony to the idea that true liberalism is social, because it strives for the greatest possible future and self-determination for all individuals.

D66 has for a long time disliked the use of labels to frame the party’s identity. Since its establishment there have been discussions about calling the party ‘progressive liberal’ or ‘freethinking demo­crat’ . This hesistation to acknowledge an ideology as leading, also had its consequences for international politics. D66 MEP Jan-Willem Bertens had joined the liberal group in the European Parliament in1989 in his personal capacity, D66 was not ready to choose for the liberal label at the time. Only in 1994 D66 joined ELDR. As of 1999 the party calls itself social-liberal.  At present, D66 is characterised as progressive and social-liberal party. The following  five guiding principles are testimony to that vision.

Trust in people’s own power

We believe in the power of people and their ability to develop as individuals. This is why we feel optimistic about the future. People have the creative ability to keep coming up with new solutions. We want a government that supports people’s intrinsic creativity and resourcefulness. Individual people are the key to change and we want a government that acknowledges this fact. What people can do for themselves and for others is far more important and effective than anything a government might legislate.

Societies are becoming interdependent in an ever increasing number of ways. We welcome the world and exclude no-one. In everything we do, we consider the effects our actions may have on others in the world. We recognise that Europe and the Netherlands are increasingly becoming one. International cooperation and economic progress are the keys to a world with fewer wars and conflicts. Our decisions must be pragmatic, level-headed and based on facts.

People differ from one another, yet at the same time they are all equal. Each individual is unique and we want a government that provides the freedom for those differences to flourish. We seek economic independence for as many people as possible and we believe in rewarding those who excel. We want a dynamic, open society in which everyone has the freedom to make their own decisions and to develop as they wish. We consider it a matter of course that wealth should be shared. We want to see as many people as possible participating socially and economically because that is the road to increased prosperity for everyone. We acknowledge that for we all share responsibility for those in our society in less fortunate social and economic circumstances.

Work toward a sustainable and harmonious society

We want to embrace the world with respect and compassion. That respect and compassion applies both to the people around us and our environment. The earth is neither our personal property and nor an expendable consumer good. We wish to end the depletion and pollution of our environment. We feel the discussion on the environment should shift the burden of proof from having to find arguments in defence of preservation to arguments in defence of exploitation.

The fundamental values of our society are freedom and equality for everyone, regardless of belief, religion, sexual orientation, political views or ethnicity. Physical safety, non-violent solutions to conflicts of interest and the respectful exercise of freedom of expression as well as good governance and rule of law, form our core values. These values are universal and paramount. We defend civil rights, both at home and elsewhere.

Our priorities in the Netherlands for the coming years (2018, ->)

D66 proposes reforms to prepare the Netherlands for the future. We want to do things differently. In the years to come, D66 will focus on five themes: education, employment, housing, sustainability and governance.